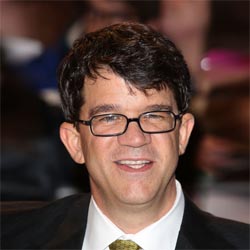 Wyck Godfrey is an American film and television producer best known for producing The Twilight Saga series and The Maze Runner series. He was also partner of production company Temple Hill Entertainment with his friend Marty Bowen, which they founded in 2006. In 2017, he was named President of Paramount Motion Pictures Group.[1] In 2020, Godfrey left Paramount and returned to producing with Temple Hill Entertainment.[2]

Godfrey graduated from Science Hill High School in Johnson City, Tennessee,[1] earned a degree in English literature from Princeton University, and later moved to New York City, where he interned at New Line Cinema.[3] In February 2006, he and his friend Marty Bowen founded their own production company, Temple Hill Entertainment, and produced The Nativity Story as their first film together.[3][4] He was raised Christian.[5]